Monobank has successfully completed the development of a multi country platform to facilitate efficient and expedient geographical expansion of its core business. Accordingly, the bank launched loan operations in Finland on 29th May.

The credit quality has further improved in line with expectations. With a rapidly growing data base, the tuning of the internally developed credit model continues. An integrated pricing model is now being gradually implemented. The aim is to further optimize credit quality overall and selective pricing among different customer groups. The bank is starting to see the effects of this work.

The Board decided on 25th April that Monobank fully satisfies the definition for mass market engagements/commitments as outlined in the Capital Adequacy Regulation § 5 – 8 and accordingly assigned a 75% risk weight when calculating the bank’s capital ratio.

To facilitate Monobank’s continued robust growth, an extraordinary shareholders’ meeting on 13th June authorized the board to raise up NOK 50 million in Hybrid Tier 1 capital and up to NOK 75 million in subordinated Tier 2 capital.

Total assets amounted to approximately NOK 1 915 million as of 30th June 2017, up from NOK 1 492 million at the end of the first quarter. The bank’s net loan balance was NOK 1 446 million (NOK 1 162 million) including unspecified loss provisions, but excluding prepaid agency commissions. Of net loans outstanding at 30th June, 37.8 million was extended to Finnish customers.

Interest income for the second quarter was NOK 43.2 million compared to NOK 34.2 million in the first quarter. Average loan size is stable around NOK 220 000. 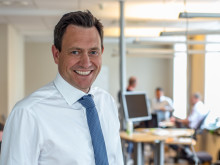 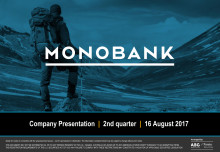 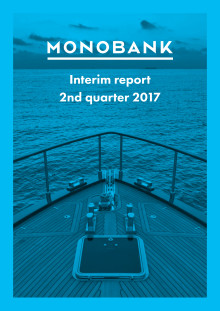